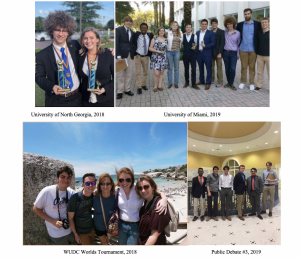 The Ty R. Warren Debate Union, an intercollegiate body of undergraduate students, engages global communication through British Parliamentary/Worlds Style Debate on campus, within our region, nationally, and around the globe.

Housed under the Trent Lott Leadership Institute at the University of Mississippi, the Warren Debate Union challenges students of all majors and backgrounds to think critically and improve their communication skills through debate and public speaking. Staging the debate on campus through their involvement and providing opportunities for public engagement annually, the Warren Debate Union is proud to host an annual high school invitational tournament recognized by the Mississippi High School Activities Association, the National Speech and Debate Association, and the National Individual Events Tournament of Champions; assist in the development and annual operation of Speakers Edge, a competitive speaking event for our MBA and Masters in Accountancy Programs; and present five public debates for the evaluation of the Lafayette-Oxford-University community.

Be intuitive, be creative, be brilliant and come visit us to see what intercollegiate debate is truly about.

British Parliamentary Debate is a part of the United States Universities Debate Association circuit of sponsored competitions and programs. For more information on BP Debate and tournaments around the country please visit:
https://usudebate.com/