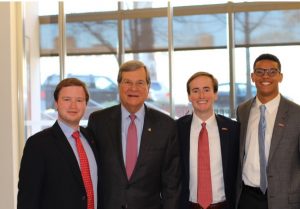 From the service of L.Q.C. Lamar in the 1800s to that of Trent Lott today, Mississippi has produced extraordinary leaders for our state and nation.  The University of Mississippi seeks to recognize the statesmanship of Senator Lott as Majority Leader of the United States Senate through the establishment of a Leadership Institute in his name. The Institute will enhance the University’s mission of nurturing the development of young men and women to make future contributions to our state and nation, as well as provide training to assist and guide current leaders.

In the Senate, Lott continued his leadership service as Secretary of the Senate Republican Conference. In 1995, he was elected Senate Majority Whip. Senator Lott is the first person to be elected to the position of Whip in both the House of Representatives and the Senate.  During his 26 years of service in Congress, Senator Lott has encouraged responsible federal funding for business, industry, education, and research to enhance the quality of life for all Americans.